What is Neoclassic Art? 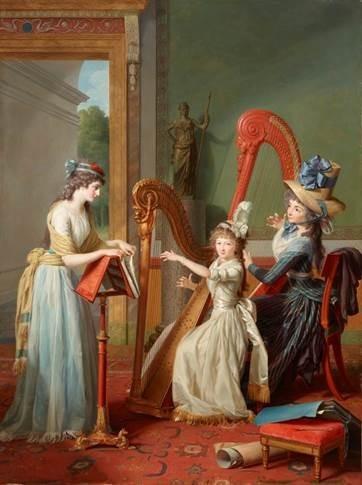 Sifting through the art news of the week, I stumbled across an article from Artfixdaily saying The Dallas Museum of Art announced its acquisition of The Harp Lesson by Jean Antoine Theodore Giroust. They described the painting Neoclassical. When I looked at the painting of three elegant women playing delicate music surrounded by vivid colors, I realized I didn’t know the difference between Classical and Neoclassical. So, I went to the best place I could think of for enlightenment: the Internet.

After Leonardo (Virgin of the Rocks) by Noe Badillo on Zatista.com

The big book of everything you need to know, or Encyclopaedia Britannica, says Classicism and Neoclassicism can be used interchangeably. Both terms describe art based on the art of Greece and Rome in a period before the middle ages. “Classicism refers either to the art produced in antiquity or to later art inspired by that of antiquity; Neoclassicism always refers to the art produced later but inspired by antiquity.”

Ballerina in brown by Pavel Kasparek on Zatista.com

According to Artcyclopedia, Neoclassicism is a mid-18th century to early-19th century genre of art. It’s an unemotional genre characterized as a revival of interest in classical art during the American and French revolutions. Around that time, Romanticism also emerged as a direct reaction to Neoclassicism. Artists were frequently influenced by both styles. The two styles were like ham and cheese; not the same, but darn good together.

Neoclassical painters often painted somber colors, with clear, strong lines. According to Khan Academy, this was because Neoclassicism was a castoff of the Age of Enlightenment. “Scientific inquiry attracted more attention. Therefore, Neoclassicism continued the connection to the Classical tradition because it signified moderation and rational thinking but in a new and more politically-charged spirit (“neo” means “new,” or in the case of art, an existing style reiterated with a new twist.)”

So, Classic and Neoclassic are not completely separate. In fashion terms it’s women bringing back leggings and high-waisted jeans. In television, it’s How I Met Your Mother reinventing Friends. In literature, it’s Pride and Prejudice and Zombies (admittedly a weak comparison). This art form pays homage to the classical era and its inspirations while still adding new elements and derivations. Basically, Neoclassic is Classic’s, older, hipper friend. 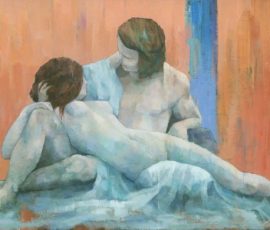 Mix Up The Old & New
Sometimes a spot of classically inspired art in your home is a nice juxtaposition to the rest of your collection which may consist of photographs, watercolors, abstract works, drawings, etc. I would love to see the two pieces above...