Known for his “Balloon Dog” series (among other things), which took the media by storm, Koons is a force to be reckoned with. His art has dabbled in subjects from childhood cartoon characters and everyday objects to pop icon Michael Jackson. According to Art News, “Starting around 2000, at least a dozen Koons sculptures appeared at auction each year, a number that hit 43 works in 2005 (for a total sales value of $15.3 million), and a whopping 73 sculptures in 2008 (for a total sales value of $88.8 million).” We know this man is popular, but to some it is an egregious popularity.

Many critics call his art kitsch. At first, viewers approach it with irony as if he is commenting on society’s insatiable need for material things, but Koons says this is too much thought. The Sacramento Bee quoted him saying, “A viewer might at first see irony in my work … but I see none at all. Irony causes too much critical contemplation.” 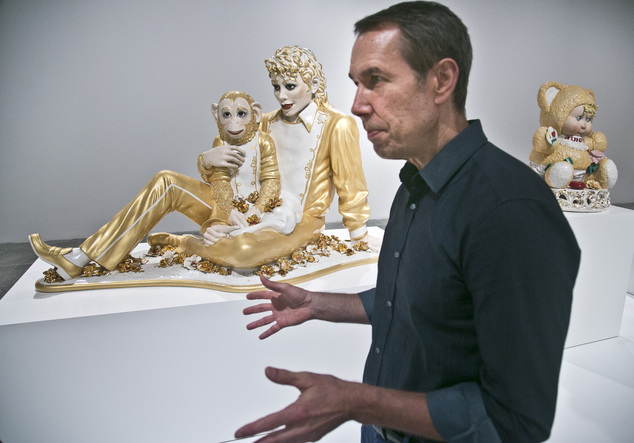 Artist Jeff Koons speaks during an interview near his sculpture Michael Jackson and Bubbles. Last year, he became the most expensive living artist, too, when his Balloon Dog (Orange) sold for $58.4 million at auction

The same article quotes Michael Kimmelman of The New York Times saying Koons art is merely self promotion and hype that “characterized the worst of the 1980s.” The author of the article, Victoria Dalkey, more or less agrees with him. She says Koons’ ceramic sculpture of Michael Jackson and his pet chimpanzee is, “A tasteless, oversized glitzy figurine, it provoked a chuckle and then a wince. This was kitsch on a monumental level – kitsch elevated to the realm of high art.”

But Koons has divided the public. Some believe his art spurs conversation and discussions of what art is. Cosmostock writer, David Sobon, said,”The mere mention of his name stirs controversy, and that’s great. Art should inspire debate and discussion. Monet and Van Gogh received death threats and, along with Picasso and Chagall, were ridiculed for their work.” Throwing around art giants like Van Gogh and Picasso is a big deal. Does Koons deserve such a comparison? The New York Times is a fan, so how can someone dismiss him? When Whitney exhibited “Jeff Koons: A Retrospective,” featuring a 20-year project, “Play-doh,” The New York Times called the it an “almost certain masterpiece whose sculptural pile of radiant chuks captures exactly the matted textures of the real thing.” Granted, in the same sentences they compare it to a “psychedelic poop,” so maybe there is room for another opinion.

Cities and businesses have invested in Koons’ success. According to the Wall Street Journal, Paris’ Le Royal Monceau Hotel exhibits Jeff Koons’ “Balloon Venus” even though it is not always in favor with its customers. General manager Serge Ethuin said, “But we like to take that risk—we are really trying to sell emotion, and the art contributes to the emotional experience.” On March 11th, Sacramento City Council members voted unanimously to pay nearly $8 million for a Jeff Koons sculpture that will stand outside the new Kings Arena. The translucent, colorful piece called  “Coloring Book,” is based on the Winnie the Pooh Character, Piglet. The cost of the piece is stirring up controversy within the community along with the apparent disregard for the work of other local artists. The Sacramento Bee’s Ryan Lillis said, “Opponents – including some of Sacramento’s leading artists – mocked the choice, saying it has no connection to Sacramento, the city’s culture or its triumphant struggle to keep the Kings in town.”

So, Koons. He and his work seem to be a giant dividing line for the art community. This, however, also seems to be no fault of his own. The world is contemplating what is considered relevant art in a world where memes are a form of satirical reporting and flash mobs are a form of guerilla marketing. Art and expression are changing. In defense of Koons, art changes as society does; his art may reflect a change we are seeing in the world and what society finds important. Then again, when new art comes over the horizon, society can deem it relevant, or irrelevant. People choose to make it important, so if Koons work is popping up across america, it must be relevant. Maybe, years from now, Koons’ popularity will be just a blip on the art world timeline like Bieber is for pop music. The world is in the midst of making that decision, and a relevant, culturally important Koons seems to be coming out on top. For now.

Art Show Cancelled
Thats no surprise given that Koons is notorious for proposing ridiculously expensive installations for museum shows only to find they can't be funded: remember the real locomotive suspended from a crane ...
12 Album Covers by Famous Artists
Great music and great art, what more could you want? Read more to find out more about one of the most memorable artist-designed album covers in recent history and discover which one of the kings of contemporary psychedelic art...