According to The New York Times’ Arts Beat blog, “The once-grand Knoedler gallery [in New York] has been accused again of selling a forged painting for $5.5 million that was attributed to an American master, in this case, the artist Mark Rothko.”

The NY Times continues, “The Martin Hilti Family Trust sued the gallery on Tuesday, stating that a forensic analysis of the work “Untitled (1956)” reveals that a particular red pigment used in the work “was not developed until the 1960s, years after the purported ‘1956’ date of the work.”

Arts Beat states, “This suit is the fourth filed in Manhattan federal court against Knoedler & Co. since it closed its doors in November 2011. It names Knoedler’s owner, Michael Hammer, its former president Ann Freedman, as well as Glafira Rosales, the Long Island dealer currently being investigated by the F.B.I. for supplying this painting and dozens of others to Knoedler.”

Left, the “Elegy” painting that the dealer Julian Weissman bought from Glafira Rosales and sold to an Irish gallery that later demanded its money back; right, Motherwell’s “Spanish Elegy (Alcaraz) XV,” from 1953, which is part of the catalogue raisonné sponsored by the Dedalus Foundation. Photo: NY Times 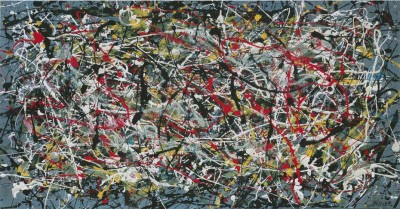 A PURPORTED POLLOCK A Rosales painting signed “J. Pollock” and sold for $17 million to a London hedge-fund director who is suing for a refund. Photo: NY Times

“Mr. Hammer’s lawyer, Charles D. Schmerler, said: “The Hilti complaint rehashes the same baseless claims contained in the prior lawsuits. Given the attention this matter has received, it is not unexpected to see copycat suits filed. We plan to aggressively litigate this case and expect to see Knoedler and Mr. Hammer fully vindicated.”

“Ms. Rosales’ lawyer has said that she has never knowingly sold any forged works.” 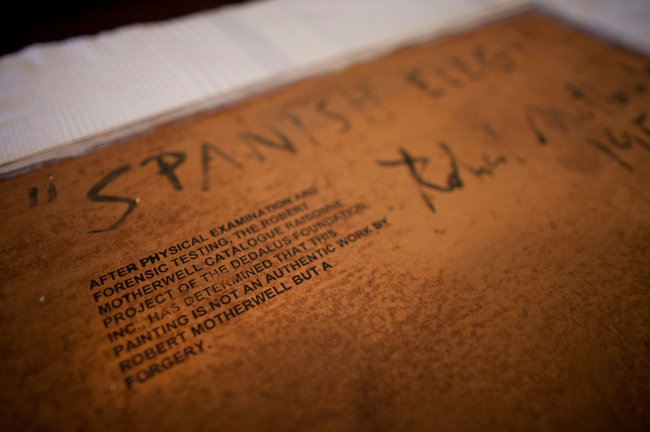 The forgery stamp that the Dedalus Foundation put on the back of the disputed Motherwell “Elegy” as part of a court settlement.

“Ms. Freedman’s lawyer, Nicholas Gravante Jr, provided a statement from her that said: “These paintings were exhibited in museums around the world and heralded as masterworks. This particular Rothko was featured at the Beyeler Foundation in 2002. The personal vendettas and professional jealously behind the attacks on the works and on my reputation should be obvious.”

What’s the truth? There’s a lot of reporting out there on this topic. Do a little reading on the topic and you be the judge. Let us know what you think here on WallSpin.

5 Art Films to Watch This Fall
Now that the weather is cooling down, get cozy and watch some good old films about art and artists. You are sure to learn something unexpected while watching any of these great films ...
Visual Words in Art
All great artists have a way to convey emotion and messages on the canvas (or their chosen medium). Some also have the ability to provoke profound reflection in words when it comes to something near and dear to their...